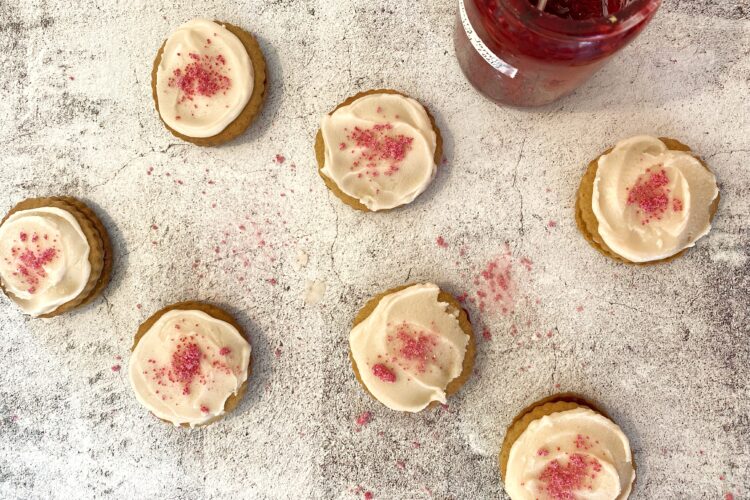 Sweet and warmly spiced biscuits, sandwiched with raspberry jam, iced and sprinkled with jelly crystals. What more can you ask for in a biscuit!

This recipe is an oldie, but it’s a goodie.

The name of these biscuits originates from the First World War when it was first named the Empire biscuit or the Imperial biscuit. Now in New Zealand it is most commonly known as a Belgium or Belgian biscuit.

I am fond of the warm spices in this recipe, and in my opinion the sweet jelly crystals sprinkled onto the icing is essential not only to the look of the biscuit, but also the taste.

Make the dough in you cake mixer.

Use clean hands to form a ball of dough. Roll the dough around the inside of the cake mixer bowl ensuring that you get all of the mixture incorporated into your ball.

Wrap the dough in compostable cling wrap or a beeswax wrap, and place into the fridge for at least an hour.

This recipe can be made the day before, just be sure to take your dough out of the fridge an hour before you intend to roll it.

Cut the dough in half to make it easier to roll out.
Place the dough between two sheets of compostable baking paper or silicon baking mats, and use a rolling pin to roll one half of the mixture at a time. Roll until the dough is between 3-5ml thick. Keep your thickness consistent so your biscuits look the same.

Use a circle cutter or a glass to cut the rounds. Keep the left over dough to re-roll (try not to over knead when you re-roll your off cuts).

Place each biscuit on a lined sheet. I like to use either re-usable silicon baking tray liners to avoid waste, or compostable baking paper (that I reuse as much as I can) and pop into my compost bin to break down.

The perfect time to cook a biscuit is between 12-15 minutes. Try not to forget about them. Although if they do come out a little more golden than you would like, never hear as often after a day in the biscuit tin they become soft with the raspberry jam hydrating the biscuit.

Leave the biscuits to cool.

Pair up the biscuits before you sandwich them with raspberry jam so that you get consistent sized Belgium biscuits.

Store in an airtight biscuit tin for up to a week.
We believe they are best consumed the day after they have been iced.

This recipe will make approximately 20-24 biscuits based on your cutter size. 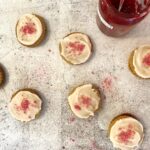